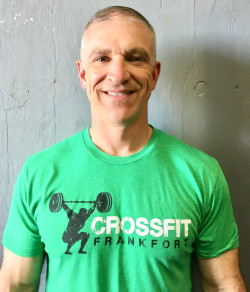 My name is Eddie Dewayne Simpson and as a coach I really love challenging people to overcome barriers that they think they have. A lot of us are ok with settling for what we or others think our ceiling is and I like to challenge that both, mentally & physically.

I was a decent athlete growing up and played baseball, basketball and football. I went into the National Guard as an infantryman in 1991 and finished college. I had been the traditional bodybuilding type but it never really keep me interested.  In 2009 I tore my ACL and had to have surgery. To strengthen my legs I decided to try CrossFit during a deployment to Afghanistan. Wow, that decision changed my physical fitness goals and life forever. I got my Level 1 in 2010 the first time, and owned my own affiliate before having to move for work. I’ve also had the privilege of being a CF Games Regional Competition Judge for 5 of the last 7 years.

I’ve always enjoyed competing and CrossFit is a great way for an old guy to compete. I have been fortunate over the last 4 years to have been in the top 200 of the world as a 40-44 year old Masters Athlete 3 times and competed at WODapalooza twice.  In 2018 I went on to qualify for and was given the honor to compete at the CrossFit Games as a Master Athlete 40-44 and finished 16th in the world.  I continue to learn and think the best way to improve is hard work and good coaching, so work hard and get after it!!!!