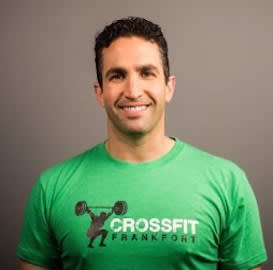 Growing up in Colorado, I have always had a passion for outdoor activities. Mountain biking, hiking, soccer, skiing and snowboarding were all sports that I dedicated my time to. I brought my love of these sports with me to college at the University of Colorado at Boulder, where I majored in Kinesiology and Biology and quickly developed a love for being in the gym. My senior year, I combined the training and academics and became an American Council on Exercise (ACE) personal trainer and group fitness instructor, as well as a Johnny G Spinning instructor. I trained clients at the university recreation center for two years, and also had the opportunity to be trained in Olympic lifting, before changing careers by enlisting in the United States Marine Corps. After four and a half years of service, I became an officer in the Marine Corps and went on to serve another four years.

The Marine Corps was where I was first exposed to CrossFit, but I was never able to join a box or do the prescribed training on a regular basis. I saw the benefit but was never able to take full advantage of it. It wasn’t until I was out of the Marine Corps, and oddly enough, back in Afghanistan supporting the Marines, that I was able to really begin doing CrossFit consistently, and I was completely hooked after that. After returning to the States, I quickly joined CrossFit Reston and began a new journey that would lead to CrossFit Frankfort.

CrossFit has brought everything that I have learned over the years into a single package that just makes sense. Every day, there is a new challenge, a new goal, and while it feels good to break an old PR and set a new one, it’s even better to see the members of our box do it. It’s amazing to see just how far people can go when they set their mind to it.