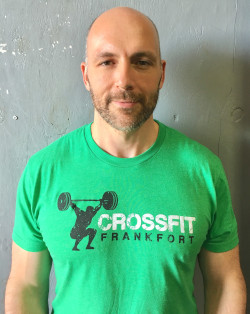 When I was little, living up a holler in Owenton, KY, I was very active and outside as much as possible, climbing tree and riding BMX bikes through the woods.  In my early teens, after my father pass away, I let that slide and found video games and potato chips.  Quickly, my energy level tanked and my weight skyrocketed.  After a relatively fat filled time of high school where the only exercise I got was marching band, I went to Berea college where I met my wife, Elizabeth.  During her pregnancy with our first child, Jacob, and working as a pizza delivery driver, I gained a seventy-pound dough baby belly in less than a year.  Afterward, I was growing about as fast as Jacob and before I knew it I was up to three hundred and fourteen pounds in total.

In 2012, I had a realization that I was going to die if something didn’t change.   At this time, divine intervention straight from Jesus occurred and a friend of mine asked me to try mountain biking with him as he was interested and didn’t want to go by himself. With my new-found epiphany of imminent death from being overweight and since Capital View Park right here in Frankfort has quite a few really good trails, I figured that it was an acceptable plan and I agreed quickly.  With just a small tweak in my diet of removing soft drinks and mountain biking three times a week, I lost over sixty pounds in the next year.  Then I plateaued at two hundred and fifty pounds.  I felt much better and was in better health but I stayed this way for two years and was feeling stuck.  I was still overweight and still became out of breath when going up just a few flights of stairs.  In 2015, another friend of mine moved to Frankfort and started working with me.  He had been doing CrossFit while in the army and after looking around decided that CrossFit Frankfort was the best place to go because of the owners being Marines.  In another direct answer to prayer, he looked straight at me and told me that I was going too.  I said sure and have never looked back.

Since February of 2015, I have stopped watching my weight and started looking at nutrition, strength, and performance.  I’ve lost a huge amount of fat and gained a lot of muscle.  Not only do I not get out of breath going up stairs anymore, I’ve even run sixteen miles doing the Bourbon chase.  I’ve realized that what high intensity interval training gives me is life and that it should, no needs to be shared.  I became a CrossFit level 1 Trainer in August of 2017 and am proud to be able to teach and encourage others to follow me along a path towards being healthy and strong.  I hope that I can be used by God to answer the prayers in someone else’s life, like my friends were in mine.