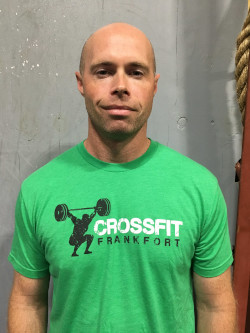 Born and raised in Versailles, KY, I grew up having two younger brothers.  We were always involved in sports and competing. I had a passion for baseball and the Chicago Cubs.  I played baseball all through high school and some travel leagues as well as mixing in some football.  My love for sports and fitness influenced my drive after high school wanting to find a program where I could learn more about the physiology of exercise.  I graduated from the University of Kentucky with a Bachelors of Arts degree in Kinesiology: Exercise Science in 2002. During college I met the love of my life Shelly.  She was my childhood crush! We married in 2000 and have two kids that we are very proud of, Brad and MacKenzie.

After college I became a Fitness Specialist at Falling Springs Arts and Recreation Center in Versailles where I really enjoyed guiding people through their fitness journey.  The relationships that I built with clients was so rewarding. During this time I became interested in becoming a Firefighter. My father was a firefighter when I was young and I became intrigued with his stories and the brotherhood.  Helping others during their time of need and the camaraderie of the fire service was something that I very much wanted to be a part of. I was hired full time at the Versailles Fire Department and worked there for 8 years before getting hired full time in my current position with the Lexington Fire Department in 2010.  I was certified through the American Council on Exercise (ACE) as a Peer Fitness Trainer conducting fitness assessments for firefighters throughout central Kentucky and worked for the State Fire Commission helping with the Firefighter CPAT (Candidate Physical Abilities Test).

My first exposure to CrossFit was as a member of CrossFit Maximus in Lexington in 2013.  I enjoyed with atmosphere and the push I got from doing the same workout with others in the box.  My wife and I started distance running that fall and my training transitioned to run half marathons.  Wanting to get back in the box, I emailed Coach Jason right after Christmas of 2014 about trying out CrossFit Frankfort.  From the first day I felt right at home. The people that I’ve met and the relationships that have been built are amazing. My wife and kids joined CrossFit as well and we love the ability to work out and have healthy fun together.  The high intensity functional movement training has improved my ability at work and my overall fitness. I decided to get my CrossFit Level 1 trainer certificate in August 2017 and have enjoyed getting back to coaching and training all of CFF’s amazing athletes.